Despite being born in a country like India, where nearly every village and street corner boasts a place of worship for the divine feminine, I felt no connection with her during my formative years. Sure, I participated in holidays and festivals celebrating her but never paused to consider her significance in my life. Perhaps this had to do with the relationship I had with the women in my life, or more importantly, how I viewed myself. Perhaps it also had to do with my convent education (one that I treasure deeply), where even though there was no overt proselytizing, God as father loomed large in my adolescent psyche. 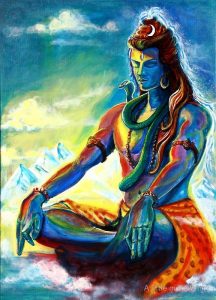 Psychological reasoning aside, I was fascinated and often obsessed with the divine masculine in his many forms. Growing up in a Veerashaiva family, he held my interest as Shiva.

For hours on end, I’d sing and adore the image I held of him in my heart – the great dignified yogi with the power to harness the universe with a mere glance. You’d think this devotion alone would’ve been enough to catapult a spiritually hungry young woman on a straight path of inner unfolding. It did, but not in a smooth fashion. Everything about the path unfolded  in a tumultuous way, beginning with the arising of existential questions. I pestered my parents and family with endless questions. What is the purpose of life or rituals? What do the symbols mean? How come Shiva doesn’t destroy all the evil in the world when he clearly can? My family found my questions annoying, to say the least. 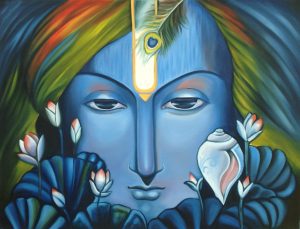 In a sheer stroke of serendipity, I was taken under the wing of our illustrious math teacher. In addition to math, she was proficient in Sanskrit and was a Vedantin and devotee of Lord Krishna. She taught me to recite the Bhagavad Gita for chanting competitions, igniting a deep love and thirst for the lush text.

Almost overnight, Krishna began to occupy my mind and senses as the supreme force of creation. For the next two decades, the Gita became my handbook for living and Krishna my divine Beloved. God remained distinctly and stubbornly masculine as I journeyed into Vedanta and delved into non-dual inquiry.

The basis for successful inquiry is discrimination, or the ability to distinguish between the real and the unreal. It is further honed through dispassion, the quality of non-attachment to the unreal. As I forayed deeper into the teachings and cultivated these qualities, I became a wife and mother, graduated from cardiology fellowship and started my medical practice, and began to struggle with questions such as, “How can I remain non-attached to my children?” “Why is there so much suffering?” and “What about love?” As my sadhana continued, the chasm between the real and unreal widened and I often felt dissociated from the world. Logic and discernment had taken over to such an extent that I often felt like my life and sadhana lacked “juice.” Finally I hit a wall.

As I sat in meditation one day, lifetimes of sorrow emerged, flowing into a torrential river of tears. Desperation mingled with sobs and I felt ready to throw away the decades of sadhana. From the eye of this hurricane arose a clear, calm voice that said quite simply, “Take up Sri Vidya Sadhana.” Curious to explore what the voice was referring to, I got initiated into Sri Vidya and began to practice.

My life and sadhana would never be the same. I had come into the arms of the Divine Mother. Sri Vidya opened doors that had previously remained closed, revealing the splendor and sweetness of Shakti’s divine presence. For the first time in my life, God was a feminine force, weaving through my body, senses, mind, emotions, the world, and the universe in delightful and sometimes alarming ways.

As soon as I opened to her, my relationship with my body, mind and sadhana began to shift. Instead of holding them in cold scrutiny, I explored the hidden layers of vibrations and consciousness underneath them all. The many facets of my own fluid body and dynamic mind became the playground for exploration. What do these sensations really point to? Where do they come from? Where do they go? Is there a causality to these emotions, these thought patterns, these judgments? At every point, I called out to her, “Show me, Ma!” and she complied. Almost as soon as I asked, she rearranged my life circumstances to enable deep seeing. 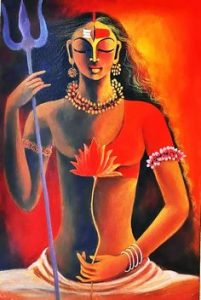 Coming home to Ma has transformed my relationship with my own inner demons, turning them into allies and forces of divine alchemy. She shows me how to love my angst, my frustrations, my disappointments and my inadequacies, coaxing me to polish each of these facets to where they begin to reveal her sweetness that permeates them – they are her children too.

Everywhere I look, I see her face – not just in those of my children, but also those that evoke darkness in me. She challenges my assumptions about the meaning of shadows and darkness, daring me to find one thing that doesn’t have her presence in it. “Look!” she says, sometimes lovingly sitting me in her lap and at other times holding my head under the water until I’m begging for mercy.

In her home, this universe, darkness and light have an equal place and she is the generator of both.

Shakti demands not just devotion but also clarity. Sri Vidya polishes the lens of perception and facilitates nondual inquiry, which has taken a turn for the better. Everything I had learned in Vedanta has begun to vibrate with aliveness – the juice I’d longed for has begun to flow. I have fallen in love with Shiva again, but this time he isn’t alone – he is but one half of the inseparable duo he makes up with his beloved. He stands still while she dances, weaving the cosmos out of his stillness, bringing forth the stars, planets and moons from her dark womb and absorbing them back into herself. Inquiry reveals this to be the case in every moment, where our perceptions, thoughts and emotions arise and subside into the sweet loving embrace of the Divine.

In her sadhana I am coming to see that I too have never left her womb – she has held me here in her fierce love even when I’ve ignored her.

I get it now when my children do the same. And I hope that someday, for their own sake, they too will come home to Ma.

Invoking Grace, Courage And Healing: COVID-19 And Beyond

By continuing to browse the site you are agreeing to our use of cookies.
Join Waitlist We will inform you when the product arrives in stock. Please leave your valid email address below.
x