Varahi, the boar-headed goddess has been calling. And she is a force I cannot ignore or avoid; she simply doesn’t allow that. It also doesn’t matter that I haven’t directly invoked her. It was on my yoga mat while moving from one asana to another that she suddenly appeared in my mind’s eye. I was startled, for my sadhana hasn’t directly included her. Since then, she has held my sadhana in her powerful grip, forcing me to look deeper.

Turns out this is what Varahi does. She appears to us in her formidable form, no matter what our sadhana or life path. And when she does, we are shaken and uprooted in every way.

Varahi’s mysticism and symbolism are complex and multi-dimensional. In the Devi Mahatmyam, she appears as one of the Saptha Matrikas (seven mother goddesses). These seven goddesses – Brahmi, Maheshwari, Kaumari, Vaishnavi, Varahi, Mahendri and Chamundi – emanate from the Devi’s own being and they leap on to the battlefield in the great war against Shumbha and Nishumbha. Varahi moves powerfully through the asura armies, crushing them with the weapons she wields in her many arms. The Matrikas work in collaboration, where each of their individual powers are amplified and synergistic with all the others’.

The Lalitha Sahasranama consists of a thousand names extolling the radiant Devi Lalitha Tripurasundari, the central deity of Sri Vidya. This hymn is said to contain the secrets of the universe and of our inner journey.

Lalitha Devi is invoked in various ways, one of which describes her as the destroyer of the exceedingly evil Bhandasura, a demonic being who takes birth from the ashes of Kamadeva (or Kama), a story that is inexorably entwined with that of Shiva and Shakti.

Brahma, Vishnu, and Shiva are known as the great trinity, responsible for creating, sustaining and destroying the universe. The legend is that Shiva was known for his asceticism, and lived in the remote peaks of the Himalayas. His absorption in meditation created a great imbalance in the universe since life cannot be sustained without death. Brahma and Vishnu invoke the great Shakti and ask her to help rouse Shiva from his meditation. Shakti took birth as Sati, the immaculate daughter of Daksha, one of Brahma’s sons. Against Daksha’s strong wishes, Sati won the heart of the austere Shiva and married him, transforming him from a detached yogi to a loving husband. Soon after the wedding, Daksha performed a grand fire ritual and invited the luminaries from all the worlds, except for his daughter and son-in-law.

Despite Shiva’s advice, Sati arrived at the ceremony hoping that the lack of invitation was just an oversight on her father’s part. Instead of welcoming her, Daksha humiliated her for marrying Shiva, the rogue yogi. Overcome with sadness, Sati stepped into the ritual fire and breathed her last. When Shiva heard the news, he was beside himself with rage and grief. His enraged army destroyed Daksha’s palace and decapitated him (he was later revived by Shiva’s compassion).

In deep mourning, Shiva wandered the universe with Sati’s body flung over his shoulder. Again out of balance from the withdrawal of Shiva’s power, creation became chaotic. Determined to help, Vishnu followed Shiva, consoling him with his sweet words and stealthily slicing away parts of Sati’s body to lighten Shiva’s burden. Wherever her flesh dropped on Earth, a Shakti temple sprang up (which remain intact to this day). Relieved at last of his burden and acute grief, Shiva returned to the Himalayas and immersed himself in meditation. Creation went further out of balance. 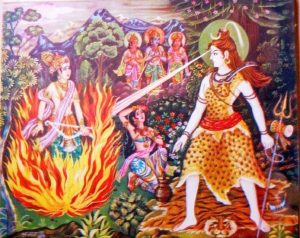 To draw Shiva out of his reverie and restore balance, Shakti took birth as Parvati, the exquisite daughter of the Himalayas. Although she tried her best to engage Shiva’s interest, Shiva remained unmoving and uninterested in her advances. Vishnu and the other deities charged Kama with the task of arousing Shiva’s desire. Kama’s desire arrow found its mark – Shiva opened his eyes to see the beautiful Parvati standing before him. Even as his heart softened in desire, he turned around looking for the source of this disturbance. He spotted Kama and incinerated him with one angry glance of his third eye. With the death of desire, creation came to a total standstill.

Parvati eventually won Shiva over and compelled by her request, he agreed to bring  Kama back to life but not back to his original form. From the ashes of the handsome god arose Bhandasura, a terrible demon. He terrorized the universe by smothering desire out of it and rendering it impotent.

Once again, the gods invoked Shakti in a great fire ritual. She rose out of the flames as Lalitha Tripura Sundari and set out to destroy Bhandasura once and for all.

The war is a bloody one. Out of Devi’s form arises a whole army of goddesses, including her prime minister, Matangi and her commander-in-chief, Varahi. Bhandasura’s army is taken out strategically and he is eventually vanquished. Devi, in her infinite compassion, absorbs him and the entire asura army into herself. 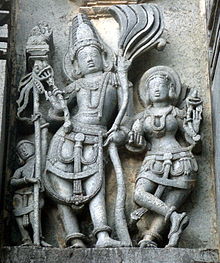 Kama is brought back to life in his original form, much to the delight of his distraught wife, Rati. Free at last, he asks to never be parted from Devi Lalitha and the ever-compassionate Devi complies. He becomes her servant, functioning through her five flower arrows that depict the seduction of the five senses that keeps us entranced in her playful dance as creation.

Symbolically speaking, Bhandasura is the lack of creative energy that fuels our desire to live. Kama represents not only the sexual drive that perpetuates creation but also the spurt of creative energy that is responsible for every one of our endeavors, be it as mundane as preparing a meal or as extraordinary as an inspired piece of art or poetry that wins the highest accolades. Without this energy, we wouldn’t have the motivation to get out of bed in the morning!

On the spiritual path, Bhandasura represents the darkness of being stuck in our deep grooves of conditioning. When we respond to life in patterns based on fear and pain, we become paralyzed, losing our ability to respond in creative, ever-fresh ways that are untainted by past experience or future expectations. Devi Lalitha comes to our rescue to fight the spell of inertia that Bhandasura inflicts upon us. He’s not just mighty but also exceedingly cunning, and devises innumerable ways to keep us stuck within our limitations.

Both Matangi’s wisdom and Varahi’s strength are needed in this great war. While Matangi deftly dismantles Bhandasura’s elaborate military formations (think of the many ways in which we justify our reasons to be stuck in our old ways), Varahi cleverly and forcefully unearths the enemies that lie hidden beneath the battlefield.

Often, our mental, psychological and emotional patterns remain invisible to us even after prolonged sadhana. The deep karmic patterns that drive us tend to be skillfully hidden under the surface. These patterns are meant to remain hidden from our conscious awareness – they are formed in early childhood to protect our self-image. Our identity or ego is made up of all the things we believe about ourselves and the world. If my childhood experience creates the story of unworthiness, that belief in lack of worth becomes my identity. Along with other such beliefs, it becomes the engine that drives my thoughts and actions in daily life. 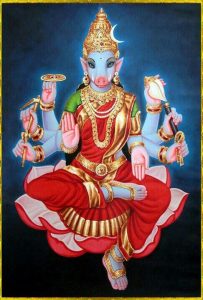 When we invoke Devi, she comes to our aid with her entire battalion. As Matangi’s plan goes into effect, our obvious non-serving patterns begin to dissolve. However, at various points on our journey, we can start to feel stuck – even when we know that there is a deeper issue we need to be looking at, we simply can’t figure out what that may be. Varahi comes to our rescue, digging out our core issues and limiting stories with her powerful tusks.

Coming face-to-face with our deep-rooted issues is not fun. We can go through periods (days or weeks) of physical and emotional fatigue arising from the sheer energy that is needed to examine these crippling beliefs and stories. Occasionally, Varahi’s digging can result in drastic changes in our lives and relationships as the threads that hold the self-image together are unraveled. Our bodies can start to feel different as the deeply held traumas are released. Our life direction can change when the concepts we were wedded to stop making sense. Most importantly, as the self-image begins to dissolve, we can feel rudderless as we drop into a never-ending free fall. The proverbial rug is pulled out from underneath our feet as Varahi goes to work.

When Varahi begins to manifest in our lives, we realize that Shakti sadhana isn’t easy. Devi’s greatest boon is that of self-discovery, where we realize that her essence is what we really are. In the process, she strips us of everything that obscures this essential truth. The process of self-discovery is one of deep excavation; Varahi is that form of the Devi that facilitates this not-too-pleasant process. Be it in the surfacing of dark emotions like envy, rage or fear, the inexplicable urge to withdraw from loved ones, the swirl of dark thoughts that seemingly come out of nowhere, or the inability to compromise anymore in stuttering relationships, Varahi calls out everything that is slowing down our progress in sadhana.

As soon as these (and other) issues are driven to the surface, Matangi’s light of wisdom can incinerate them to allow for Kama’s creative energy to rise again. Through deep contemplation and self-inquiry in the context of deep meditation, we stand strong against Bhandasura’s army. Lalitha as beauty overpowers our limitations so that the impotent Bhandasura can be laid to rest. In the place of his heavy, dark energy, we are gifted with her playful sweetness where every moment is experienced as an eruption of scintillating aliveness.

As with all the other goddesses of the Sri Vidya tradition, Varahi teaches us the paradox of the spiritual path – the deepest truths require the greatest surrender.

Invoking Grace, Courage And Healing: COVID-19 And Beyond

The Secret Sauce In The Empty Cup

By continuing to browse this site, you agree to our use of cookies.
Join Waitlist We will inform you when the product arrives in stock. Please leave your valid email address below.
x