What do I want and why?

This is the most fundamental question, whether we are planning a meal, a project, a life decision, or a contemplative inner journey. The why of what we do colors the doing, the perception of its results, and everything in between.

There are endless possibilities for self-deception if the why of what we do is unclear. Most often, we come to the contemplative path to escape the planning and the outcomes of the said meal, the project, and the life decisions. Often, the spiritual journey is attractive to escape the pain and suffering associated with life.

However, we often fail to realize that we bring our personal why to the inner journey. The why of our other endeavors doesn’t disappear just because this is a “spiritual” path. It just morphs and dons a new set of clothes.

THE WHY of WHAT and HOW

Pause and reflect on why you do whatever you do. It’s quite irrelevant whether you are spending the day painting your living room, cooking a meal, picking up your child from school, working in the office, participating in a rally, or meditating. Start with the most obvious why. Sure, it can be to create a better living space, enjoy a nice dinner, play with your child, get paid, fight for your rights, or cultivate inner peace, respectively. But, why do you want to create a better living space, etc?

Moreover, how do you go about doing what you do to accomplish the why?

When we think about it honestly, the why of what and how has to do with our identity. What I take myself to be (my identity) is the why for the what and the how. What is my identity? Well, this is for all 7+ billion of us to figure out for ourselves. Your I is made up of the life experiences that shape your beliefs, values, social, cultural, religious and moral norms, and your shoulds and should nots for yourself and the world. Similarly, my I is made up of my own experiences. If your value systems agree with mine, we get along, validating and justifying each other’s whys. In the process, our own identity becomes stronger along with its why.

In contemplative traditions, this identity is known as the ego. In other words, our why is essentially non-different from our ego.

The ego drives what we do and how we do it so that it remains strong and well.

Quite innocently, we scheme and manipulate our way through life to reinforce our pre-existing beliefs about ourselves. We seek validation for who we are and how we perceive ourselves (the ego), justifying what we do and how we do it so that we don’t have to fundamentally change the why.

Here’s the kicker – the why is the fuel for our anger, rage, hatred, envy, prejudice, resentment, and overall dysfunction. Since these attributes are socially (and God forbid, spiritually) unacceptable, we find ways to mask them by changing the what and how. Instead of painting the living room or cooking a meal, we now engage in spiritual practices. We meditate, do rituals, read texts and books, shop for gurus and ashrams, and engage in spiritual discussions.

The what and the how have changed.

The why remains unquestioned.

And so we do what we do well – find practices, traditions, gurus and saṅghas that suit our pre-existing view of our self (the why). When the said practices, traditions, gurus and saṅghas validate us, we feel like we belong there. When they don’t, we feel this is not “for us” and continue shopping until we find something that doesn’t question our fundamental why, the ego.

The inner journey is one of freedom from the contractions of the ego, which is built and fattened by what we learn to do well in all other areas of life – manipulate and scheme our way into feeling better about ourselves and our way of being, justifying our scheming and manipulating to hold on to our beliefs, anger, hatred, prejudice, dysfunction…

To a large extent, scheming and manipulating to get what we want works in all other areas of life… just not on the spiritual path. As much as we try, it can’t be done – we can’t manipulate our way to true peace or freedom.

While it is important to find a path that we can stay on long enough for it to work, we must also understand that often, it has less to do with the path and more to do with our own contractions. Any path that promises true freedom and is worth its salt will dismantle the ego, which is not fun (for the ego, of course). As much as we claim we want freedom, the path will challenge this notion again and again, questioning the why until its very structure disintegrates.

This is the beginning of true freedom – freedom from the scheming, manipulating, posturing, and defending that is in the very nature of being human.

One of the hallmarks of advancement in the contemplative journey is the ability to take feedback. Life has the innate gift of giving continuous feedback. We just need the eyes to look honestly at our own lives. Our ordinary way of being is one of victimhood – we are victims of our lives, helplessly standing by while life seems to “happen” to us. We view ourselves with blame or pity, which become the fodder for the ego to scheme and manipulate ourselves and others, often to remain in the position of being right at the cost of being free. It’s far easier to remain a victim than to take responsibility and to blame and pity ourselves or others than to rise out of that dynamic altogether.

When life isn’t indirectly giving feedback, we get it from those around us. When our why isn’t clear and we remain contracted in scheming and manipulating our way into being right, feedback is confused with gaslighting.

When we are open and discerning, even gaslighting can be taken wisely and pragmatically as useful data to examine our own why in a dispassionate manner. When we lack discernment, even the most well-intentioned feedback given with love and desire to propel us onward toward freedom appears as gaslighting.

This is not to say that there aren’t those that do indeed gaslight. Those entrapped in their own egos manipulate and scheme others to further their own goals. Here, we are discussing the difference between mirroring and gaslighting, which makes all the difference for one on the spiritual path. Ultimately, it is upon us to decide whether the feedback is mirroring or gaslighting. This takes high levels of discernment and dispassion, two of the most critical attributes to cultivate if we want to progress on the spiritual path at all.

This is where Vārāhī comes in… 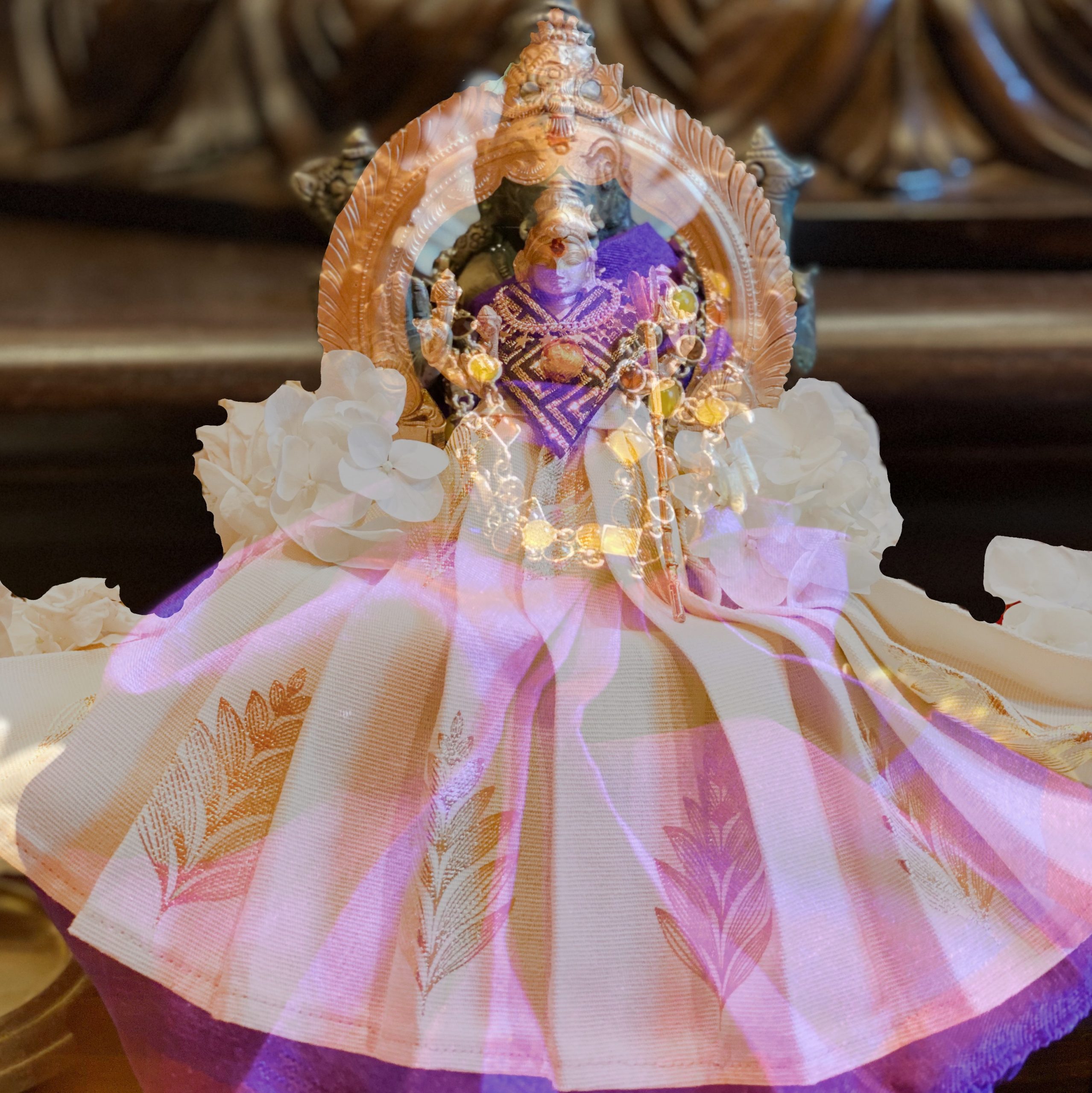 VĀRĀHĪ, THE POWER OF DISCERNMENT

“She is a force to reckon with, Amma,” said Aiya. We were sitting together and I implored him to tell me more about her.

Vārāhī Devī, the boar-headed fierce goddess is said to reside at the Ājñā cakra, the center of discernment. Vārāhī has many significant roles in Śrīvidyā, including her origins as one of the Sapta Mātṛkās, her association with language, her place in the Śrīcakra (see Fractals of Reality: Living the Śrīcakra), her role in the war against Bhaṇḍāsura in the Lalitā Sahasranāma (see Glorious Alchemy: Living the Lalitā Sahasranāma), the ruling deity of the various groups of dhātus, and as the father figure that contributes certain tissues (in case you’re wondering, Kurukullā Devī is the mother figure) at the time of conception.

In many traditions, the Vārāhī mantra dīkṣa is not given until a sādhikā reaches a certain level of maturity and discernment. To see why this might be, we can understand her as Daṇḍanātha, the one who bears a daṇḍa or stick/rod.

Think of it this way – without discernment, her rod appears like gaslighting! Her mantra brings about all kinds of feedback. She brings about situations where the structure of the why starts to disintegrate, which is no fun. Immense churning comes up as direct and indirect feedback – from our own misperceptions, relationships, life situations, saṅgha, and mentor or guru.

In other words, the rod strikes us from every angle. Yes, no fun at all.

Without a high level of discernment and dispassion, the rod becomes unbearable. It’s far easier to do what we normally do – escape into other whats and hows where our why remains unquestioned and well. The very saṅgha and the guru that were once beloved become intolerable. We feel gaslit and we leave, angry, frustrated and habitually driven to find ways that validate our why, aka, the ego.

“Daṇḍanāthā is Vārāhī, the boar-headed goddess who rides the Kiricakra or the chariot of light that represents the continuous cycle of creation, preservation, and destruction (saṃsāra). Vārāhī resides at the Ājñā, where she untangles the Rudra granthi. When our sādhana reaches this level, we are directly contemplating the trikoṇa, which leads to its collapse into the Bindu, and the end of the cycles of saṃsāra.”

The trikoṇa is the fundamental triad of Reality of the seer, seen and seeing, which is the innermost triangle of the Śrīcakra. Creation at the macrocosmic and microcosmic levels arises from the trikoṇa.

In the trikoṇa, our ego or the why is the seen or the object, which we mistake for the seer or the subject. This fundamental misperception is known as Māyā.

When invoked, Vārāhī plows the depths of our why to uncover our intentions. In the process, all our self-deceptive patterns are turned on their head. What we hold dear – our beliefs, especially about ourselves that inform our beliefs about the world – start to fall apart. We rise above the superimposition of the seen over the seer with wonder and amazement. This is known as camatkāra.

Suddenly, feedback is welcomed joyfully. It becomes impossible to gaslight one who is open and free of emotional entrapment (dispassion). “You’re a fool!” you say, and s/he responds, “Yes, I am, and have plenty of evidence that this is true. Thank you. You’ve given me the opportunity to look into this.” Free of defensiveness, the practitioner schooled by Vārāhī becomes soft, open, pliable, vulnerable and ready to be welcomed into Lalitā Devī’s magnificent presence.

Did we really think we can hold on to pettiness AND arrive at freedom?! Vārāhī has absolutely no qualms about gaslighting us (ha! except that it feels like gaslighting only because we aren’t ready for her rod). She is indeed a force to reckon with. All our inauthenticities take a royal beating at her compassionate hands.

She is, after all, the commander-in-chief of Lalitā Devī. We must pay obeisance here at her altar, strip ourselves of our ego and our why to become radically authentic. Only then does she open the door to the palace of Lalitā Devī, the pulse of Reality and absolute freedom.

Pushing Our Children to Succeed

By continuing to browse the site you are agreeing to our use of cookies.
Join Waitlist We will inform you when the product arrives in stock. Please leave your valid email address below.
x